Egyptian demonstrators hold a banner reading "From Tahrir to Sol, democracy for all"

My contribution to the International Conference on Non-Violence.

Reactions to the Arab Spring and the way strategic powers have tried to profit from changes in the region do not leave much room for trust in governmental support. When we mobilize as citizens, whether it is in Egypt, Syria, Spain or the US, we are questioning the roots of power systems and structures, so it is not very realistic to expect we can go to those same systems and structures for support and solidarity.

We should expect to count on citizen support and solidarity. We have shared this solidarity in a very exciting way, since mobilizations that started in Tunisia spread to other MENA countries and then, with different connotations, to Europe, the US, and the rest of the world. All these movements shared the same hunger for change, for new forms of representation, for a re-definition of the concept “citizenship”.

The differences between demonstrating in a democratic country such as Spain and in openly repressive countries such as Syria or Iran are obvious, and we can all see the repercusions in real-life time. We do share, however, a need for change, a will for change led by young people who do not feel represented by old systems and structures. This can be seen through the new narrative citizens are creating using new media within a context of growing distrust of traditional media.

Even though the common ground is clear and citizen solidarity has helped ignite change throughout the region and the rest of the world, over the last months we have witnessed attempts  (media, political) to divide us, to highlight what separates us instead of our bonds and shared values. Some of these attempts to divide us have succeeded.

Syrian activists have seen with great sadness and disappointment how our legitimate reivindications of freedom and justice have been undermined by geostrategic analysis that disregard the repression we have been facing for decades. We have been shocked to discover a so-called “anti-imperialist” discourse that distinguishes between people who have the right to rise against oppression and those who don´t.

Syria has gone from being an information black hole to becoming number one Youtube-video producer in the region. By recording and sharing with the world the events that they are witnessing, Syrians are risking their lives to send an SOS message that no one seems to be listening to, including the ones who have stood against oppression in other cases of human rights abuses. They say the Syrian revolution has gotten contaminated by international interests. Is this our fault? Do Syrians have to deal not only with being bombed, tortured, arrested, displaced,  humiliated? Do we also have to be held responsible for attempts by others to profit from our suffering?

Since March 2011 Syrians have been teaching the world a lesson of non-violence. Even though this movement was faced with crackdown by the government and there is now an armed rebellion that emerged months after the beginning of the revolution, non-violence movements and initiatives continue to exist in Syria, facing unprecedented brutality. There are countless examples, the “Stop the killing” movement is just one of them: The non-violence movement will continue to lose ground as mainstream media and political agendas focus on geostrategic and military aspects and undermine many Syrian voices on the ground. Syrian voices, MENA citizens´voices, citizen voices all over the world are now easier to reach than they ever were, and yet many continue to look for intermediaries and geostrategic analysis that disregard the Syrian context and dynamics.

1. Let´s listen to citizen voices. To different, diverse citizen voices. Especially to young citizens who are leading movements and changes that the older generations did not see possible. Here are just a few examples of sites and platforms I follow, but there are countless others: 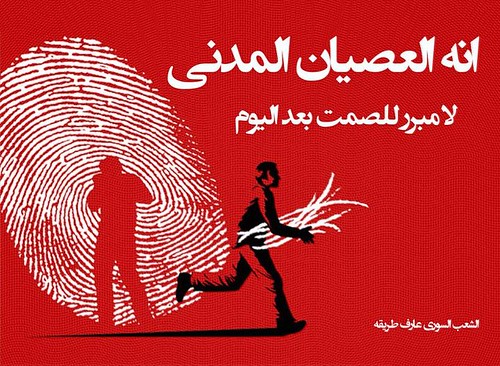 2. Let´s silence governments who silence citizens. Governments who kill, torture and silence journalists are not reliable. Let´s not go to them for quotes and insights on how to solve the problems that they created.

3. Language is sensitive. Language contributes to configuring and (de)legitimizing our movements

4. Let´s build our own networks

The Internet allows for bonds and interaction that were very difficult until very recently. Let´s use all the tools at our disposal to work together and join efforts. Coordination and citizen bonds have been crucial for revolutions to spread the way they did during 2011.

5. Let´s focus on the universal values our movements stand up for: freedom of expression, social justice, women´s rights, struggle against corruption, non-violence. Let´s not fall into geostrategic traps, let´s run away from the view of the world “in two blocks” (“imperalist” vs. “anti-imperialist”) which does not adjust to our complex and diverse realities. Human rights do not belong to any particular people, group or country, and those who abuse human rights do not either.